Kickstarter to tokenize and Binance dabbling with security tokens! 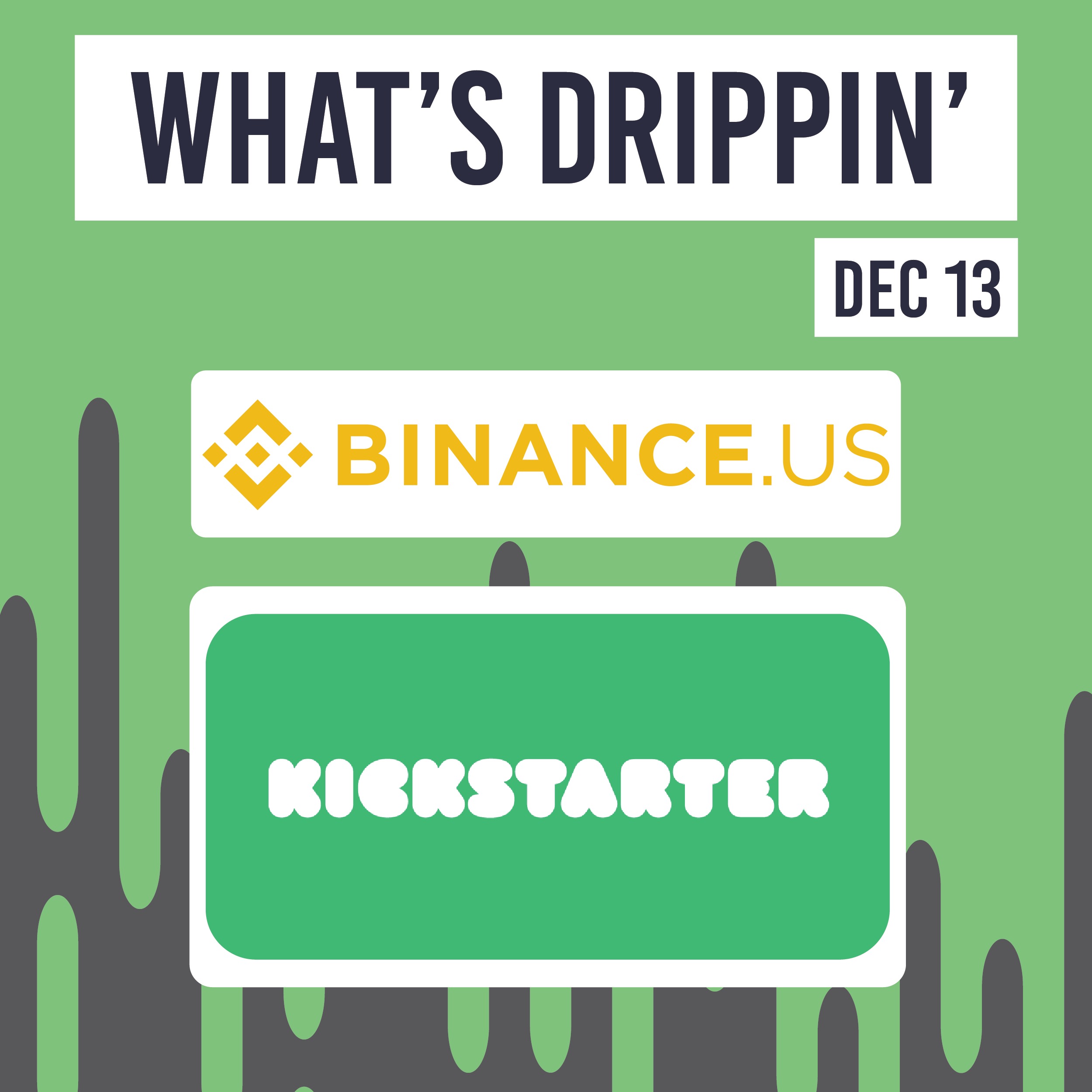 After week 8 of the Test The Waters campaign, we have received $4.4M+ in pledges from 712 investors from 20+ countries around the world!

1️⃣  Kickstarter to tokenize, but is it enough?: Kickstarter has announced they will be transforming their platform to run on blockchain... but I think they are missing the big picture!

🧐 Kickstarter to tokenize, but is it good enough?

My first thought when hearing that Kickstarter is tokenizing their platform was "took em' long enough."

For those of you who need a quick refresher, Kickstarter is essentially a crowdfunding portal where young companies seek contributions for their project(s) and in return, the contributors receive swag, perks, VIP access, etc.

So, when I heard they were going the tokenization route, my ears immediately perked up!

I'm hoping at the very least they build out the functionality to enable issuers to issue NFTs to their contributors!

Here's how Kickstarter works and how NFTs would look if enabled:

For example, let's say company A wants to raise capital on Kickstarter.

Bobby can contribute $25 to the project and be entitled to receive a t-shirt and maybe even exclusive access to future projects.

The contribution earns person A a 'badge' of some sort to receive those perks.

If it was a tokenized platform, you could issue badges in the form of an NFT, which would grant the contributor (person A) the ability to not only show off but to resell the NFT to someone else!

According to their official press release, they have helped hundreds of thousands receive funding:
"Since 2009, more than $6 billion has been pledged on Kickstarter, funding over 200,000 creative projects that otherwise may never have been made. These projects have been remarkably generative, creating an estimated 750,000+ part-time jobs, 80,000 full-time jobs, over 20,000 companies and nonprofits, and $13.5 billion in additional economic impact."

But, as I said last week, NFTs are just a fraction of the pie.

It's time for Kickstarter to think bigger!

You know what, no!

Kickstarter, you can do way better than this!

A tokenized platform is a start, but you are missing out on the whole pie.

Security tokens are the whole pie!

If you were reading my newsletter, you would know this... ugh, whatever...I'll let it go for now.

The fact of the matter is time and time again we have seen numerous companies rise to prominence and fail due to their stubbornness to adapt and overcome.

My ambitious plan for Kickstarter is to either apply for a broker-dealer license or acquire one!

With a broker-dealer license under their belt, they can transform their 'donation' platform to a platform where companies can issue equity to their loyal contributors!

It's a no-brainer to me.

If this happens, current crowdfunding portals better be on watch! 👀

I always tell people that Bitcoin and other cryptocurrencies have very little to do with security tokens... except for one core component.

Can you guess what that component is?

The core similarity between crypto and security tokens is they both use blockchain technology as the foundational infrastructure as a means of recording information and transfers.

As a result of this assumed awareness, Binance will acquire an 18% stake in Hg Exchange - a Singapore-based security token exchange with full regulatory clearance to trade security tokens!

Binance Singapore CEO, Richard Teng said it best: "Crypto and traditional financial offerings continue to converge. Through this investment, we seek to work with HGX in enhancing offerings of products and services supported by blockchain technology."

It's clear Teng has had some experience with both sides of the blockchain, (crypto and security tokens) as he was chairman of Hg Exchange, prior to joining Binance.

This was a strategic move.

The crypto industry is currently coming to an interesting spot and one that I am slightly concerned about.

Crypto, NFTs, DeFi, DAOs, and other blockchain-based products continue to bend the definition of what constitutes a security or not.

I anticipate many popular projects being investigated by the SEC at some point.

As many projects pay their fines and suffer the consequences over the next few years, blockchain enthusiasts and companies like Binance will hedge their risk by joining the security token revolution.

When you converge the benefits and efficiencies of blockchain technology with real-world assets... there's no telling how far we can go!